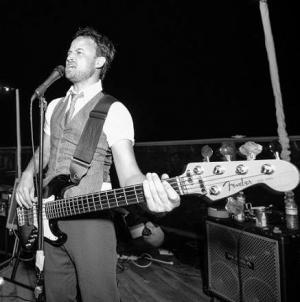 Marc Gasway is a Los Angeles based musician and and budding songwriter. He is the assistant musical director for the stage show, BPM Beats Per Minute.
Marc can be seen throughout the year playing all over Los Angeles playing to giddy crowds at Los Angeles's cluster of rock landmarks such as the main stage at House of Blues Hollywood, The Troubadour, and the Echoplex. He is the house bass player and musical director at Varnish, named one of the best bars in the country by publications such as Esquire, GQ, Huffington Post and LA Weekly. Marc is also one of the founding members of the Black Crystal Wolf Kids, the world's premiere indie rock tribute band, named one of the 14 Greatest Cover Bands in History by InsideHook.com.
Off the stage, Marc has great love for teaching, sharing his enthusiasm for guitar and bass with students of all skill levels. He's currently the guitar coach for ABC's hit show the Goldbergs. He is also an experienced soundtrack composer, his work having been featured in films at Tribeca Film Festival and SXSW.

Marc received his Bachelor's degree in Music at UC Berkeley, with a focus in counterpoint and composition.